Of all the known variants of poker, Texas Hold'em (or simply, Hold'em) is the best known and most played. Its precise history varies slightly from one source to another. One thing is certain, the game originated in the United States in the town of Robstown, Texas, around the year 1900. Hold'em was later introduced in Las Vegas casinos in 1967. It was at this time that poker became more "mainstream". At that time, it was limit hold 'em that was really popular

But as of May 24th, 2003, things changed dramatically. It was on this date that a previously unknown amateur player won the World Poker Championship in Las Vegas in the main event in No-Limit Hold'em. The echoes of this news were worldwide. From that date on, the world experienced a "poker boom" or "pokermania" depending on the region, and from that date on, No-Limit Hold'em has been known worldwide as the most popular variant. The "Cadillac of poker" in the words of poker legend Doyle Brunson

The Basic Rules of Texas Hold'em

A game of Hold'em is played between two or more players, up to a maximum of 10 players per table (depending on the cardroom, the maximum may be 9 or 10). Each player is dealt 2 cards face down and up to 5 community cards, face up, which are dealt by the dealer. Each player's goal is to make the strongest hand. To do so, he may use up to 2 of his cards in hand (0, 1 or 2) and a minimum of 3 cards of the common cards (3, 4 or 5). A player can win a Hold'em hand at any stage of the game; pre-flop, flop, turn, river or bust (more on this later), or at any stage of a Hold'em hand

To decide the winner of a hand, a chart is used which ranks the hands according to strength.

The rank of hands in poker.

The poker hands (from lowest to highest) are as follows:

Three of a Kind

The strongest hand wins the pot (also known as the jackpot). When two players have the same hand (e.g., a three of a kind that would be among the community cards), the winner is decided with his or her sidekick, the cards in hand. If the table gives us 6-6-6-2-9, the player who would, for example, have A8 would win the hand against K8 with his ace sidekick beating king sidekick

You can also win a hand by bluffing your opponents. A bluff is when a player bets as if he had a big hand, but has a very weak hand. The purpose of bluffing is to make your opponents believe that you have a very strong hand in order to get them to fold a better hand. A bluff can be intercepted (by a player calling the bet) or not (the player folds and forfeits the pot)

Playing a game of Hold'em

In each hand, each player will be dealt two cards face down. You cannot attempt to see other players' cards or give information about your hand to other players during an active hand. Even if you fold your hand (you then pass your turn), you cannot give any indication of the nature of the cards you have discarded (so as not to influence the other players still in the hand)

Cards are dealt one at a time, starting with the small blind (SB) and ending with the player who has the button (the "dealer" or "croupier", even though, in a casino or gaming hall, he is not the one who will deal the cards) 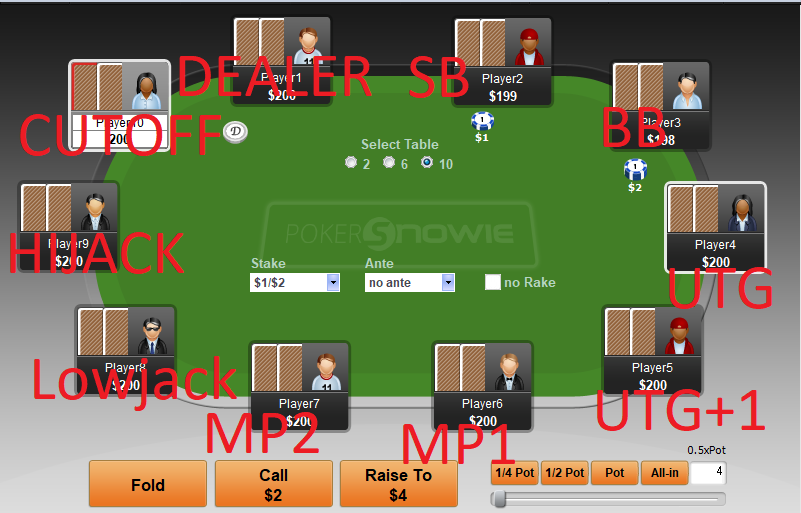 The name of each of the 10 positions at a poker table.

After the players in SB and BB position have paid their blinds and put that money in front of them, after all players have received their cards, we will play the round called preflop, which is the round before the flop (the first 3 community cards) is dealt by the dealer.

When the blinds are paid and all players have received their cards, the first player to speak will be the player in the position named Under The Gun (UTG). This is also referred to as the "under pressure" player, because he will be the first to talk, without knowing what the other players will do

Each player, in turn, will have three options: fold and not pay (folder), put the minimum bet required to enter the hand, or raise (the maximum raise will be dictated by the specific Hold'em variant).

He will be able to raise a minimum of $4. In no-limit Hold'em games, his maximum bet will be dictated by his stack (the amount of money he has in front of him). Once he has made his decision, we will move on to the next player clockwise. Here, the floor will go to the player in position UTG+1

And so on until the player in BB position completes the round. If an over-raise has occurred, the round is re-opened since all players must have put the same amount as the other players to continue

For this example, let's say the player in UTG position raised to $10 and the players in BTN, SB and BB position called the bet, in other words, put in $10 in turn. Note here that the SB will only have to add €9 and the BB €8 since they have already put preflop money into the pot. This forced bet is lost if the hand is not played. So we have 4 players still active in the hand who have all put in €10 and now it's time to move on to the next betting period, the flop

The main prize pool is now in the center of the table ($40) and 4 players will see a flop. The flop is what we call the 2nd street in poker (the first being the preflop action). The rule is always the same; in order to go to the next street, you must have put in the same amount of money as the other players

The flop consists of three cards drawn simultaneously by the dealer at the table.

For our example, let's assume that the SB player passes, the BB and UTG do the same, and the BTN decides to bet $20. The SB then has the floor and decides to raise to €60 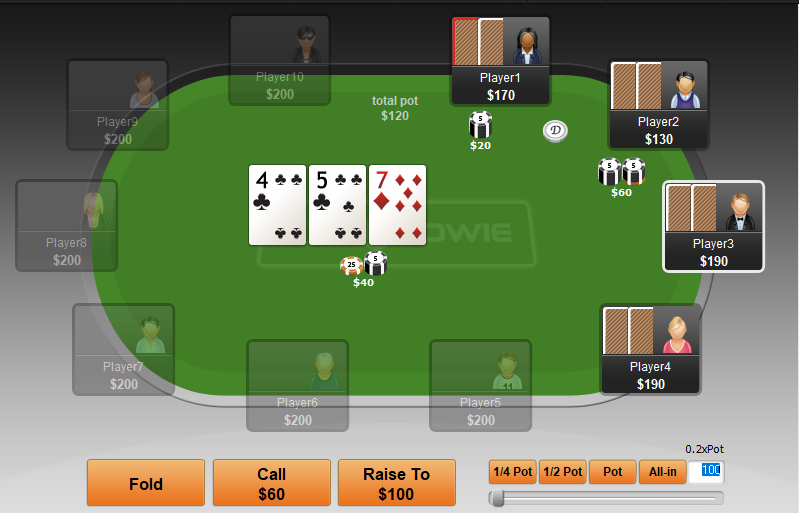 The flop is the first 3 community cards in Hold'em.

The turn is a fourth card that is added to the flop to form what is later called the board.

After the turn comes out, another betting period is opened. The SB goes back to the SB, which, for the example, passes, and the BTN does the same 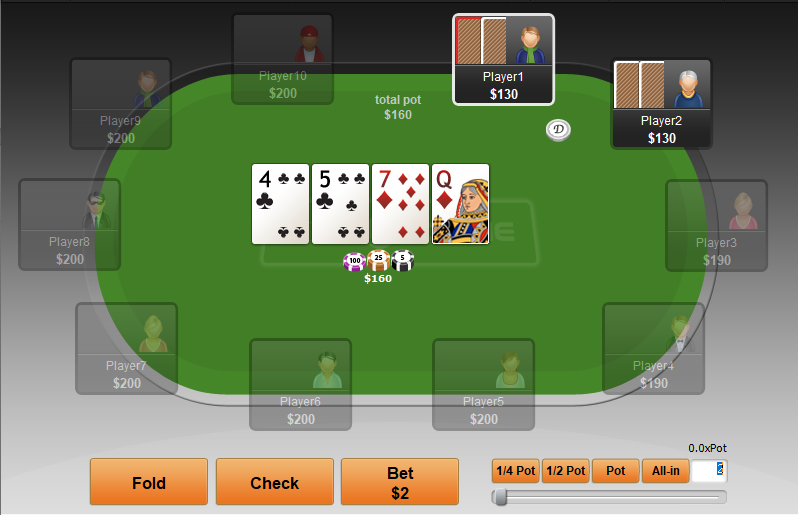 The Queen of Diamonds is the turn in this hand

Note here that even if the total pot is $160, the minimum bet a player can make will always be $2.

At any point in the hand, when a player is all in, or all in, i.e., they've put their entire stack in the middle of the table, they can go to the showdown to compare their hand with the remaining player(s). If, for example, you have €120 in front of you and a player is all in for €80, then you are risking an extra €80 in that hand, not €120 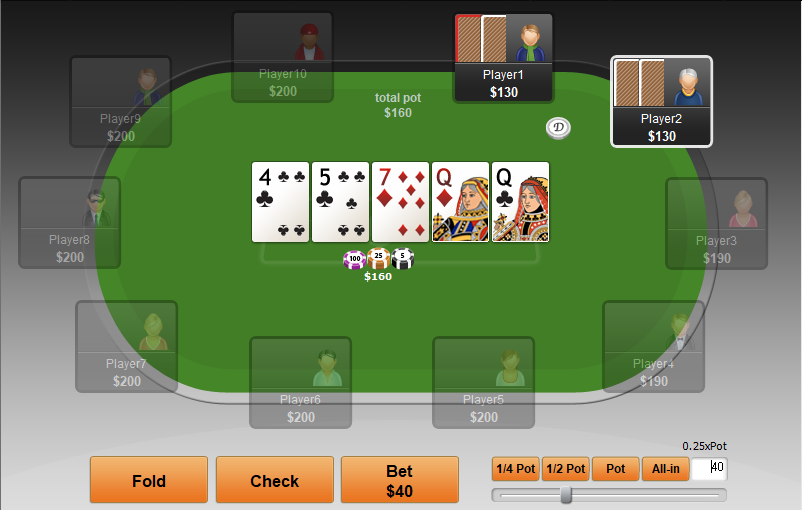 The Queen of Clubs is the river in this hand.

The fifth and final card is called the river (sometimes called the river). When this card is drawn, there will be a final betting period. Players will have the same options as in previous streets. If the SB bets on this card, for example, and the BTN does not call, he will lose all the money already invested in the pot. Here, the strength of his hand will not matter. If the SB bets and the BTN does not call the bet, the cards will remain hidden and the SB will win the pot unchallenged

If the SB bet is called, we'll move on to the next step. 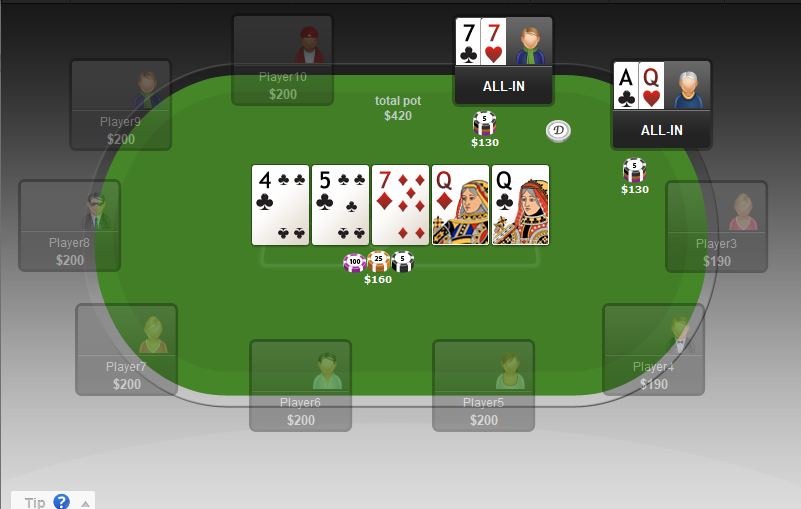 Not all poker hands have showdowns.

In a game of Hold'em, the strongest hand wins (in other poker variants, it will be the lowest hand). We're looking for a single winner of the pot. In the event of a tie in the strength of the hands, the pot will be divided equally among the remaining players. If 2 players have the same hand strength and the pot is indivisible by 2 (say a €101 pot), the player in position (say BTN) will win €50 while the player out of position (say SB) will win €51

The order of showdown goes like the order of speaking in a hand except when there has been a bet and a call on the river. If your opponent bets and you call on the river, he must reveal his hand first. After seeing the player's cards, you will then have 3 choices: show your stronger hand to win the pot, show your weaker hand or discard your cards without showing them. When you discard your cards, your opponent will obviously win the pot, but you will not give him/her any information about the nature of your hand. Since poker is a game where every piece of information is of great value, it can be strategic to give as little information as possible

Bets work in relation to the size of the big blind. If the big blind is €2, preflop and flop, each raise will be €2. So if I'm UTG and raise preflop, I raise to €4. If a player wants to raise me, he will have to raise to $6. Finally, if a third player wants to over-raise, he will be able to do so at €8, which is 4 times the size of the big blind. This 4th bet (1 for the bet, 2 for the raise, 3 for the over-raise and 4 for the ultimate raise) will be called a "cap", meaning that you can't go higher. Other players who want to enter the hand will have reduced options, i.e. call €8 or fold their hand

On the turn and the river, these raises will be doubled to a maximum of 4 raises (cap).

The minimum raise size is always the same as in other variations. The maximum raise bet corresponds to our stack at any stage of the hand. As for the minimum raise in general, it must always be equal to or greater than the previous raise