If you're a sit'n'gos or online tournament player, you should be familiar with the SharkScope site. It's a tool that will give you a ton of valuable information for your next online poker session. You can use it for free or by subscribing. Your subscription will unlock several search options. SharkScope is a fantastic tool for all tournament and sit'n'gos players

What exactly is SharkScope?

It's a web site that lists the majority of sit'n'gos and tournaments played online. Among the poker rooms covered are (the list is not exhaustive):

In their own words, SharkScope lists 99.9% of the sit'n'gos and tournaments played online.

How does SharkScope work?

In the middle of the page you'll see a search box to find the player in question that you want information on: 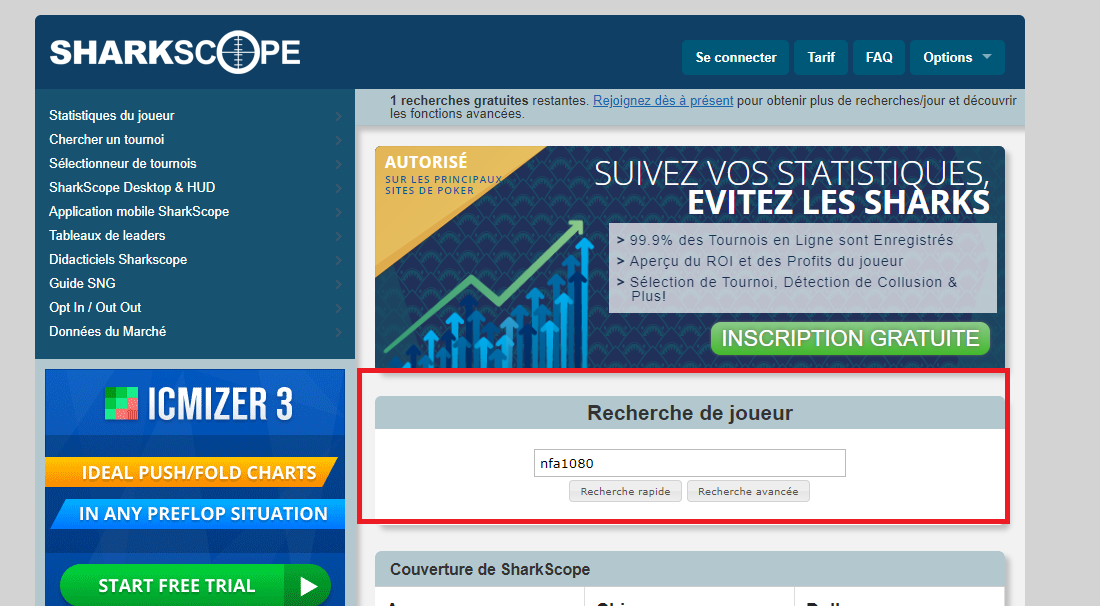 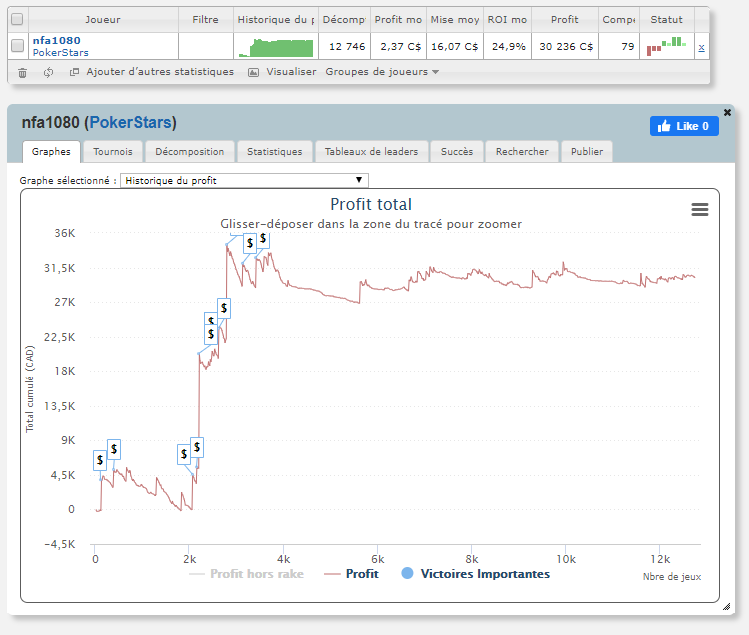 In the top rectangle, you get the player's name with the platform he's playing on underneath.

In the profit history section, we see a green graph which tells us that the player is a winner. By right-clicking with the mouse, you can see the details of the player's winnings. This will allow us to see, for example, in what types of variants the player in question made his profits. Is it a single big win or a player who wins on a regular basis? A player who plays 1000 tournaments, loses $5000 in total and then wins his 1001st tournament for a win of $200,000 will not have the same profile as a player who has won $200,000 in thousands of tournaments. What you really want to know when using SharkScope is the skill of the player. Do I have an advantage over him? What are his weaknesses?

Next we see the tournament count. Here, 12,746. This information tells us that this is a regular and experienced player. This is not his first tournament and the fact that he has won so many tournaments tells us that he knows how to play poker well and that it is no coincidence that he is a winner

Note that SharkScope uses the word "tournaments" when referring to sit'n'go and tournaments. Both types of games are included in the word "tournaments". And no distinction is made between variants (Omaha, Hold'em) or the number of entries (2, 20, 2000). You will, however, have the freedom to filter these results to get a more accurate picture of your opponent (we'll come to that later)

Here we see that the player has an average profit of $2.37 per tournament. This figure is obtained by dividing his total profit by the number of tournaments played

Here we see that the player registers for tournaments averaging $16.07, which gives us an indication of his level. For example, if you are playing a $1000 tournament and you see that your opponent registers for $2 tournaments on average, you can tell yourself that he will definitely be out of his comfort zone. It is possible that he may have won a satellite entry to participate in that tournament. It's also possible that he's tilted and not playing his best poker. Conversely, if you see a player who is registered for a $2 tournament and is used to playing $1,000 tournaments, you may feel that he may have lost confidence. Or that he's just out to have fun. You might suspect that he won't play conventional poker like a regular $2 tournament player

Our player's ROI (Return On Investment) is 24.9%. What does that mean? If we take the example of a $10 buy-in tournament, it means that, on average, in each tournament the player will have a paid seat of $12.49 for a profit of $2.49 ($12.49 in winnings minus the cost of the $10 buy-in). This is his average ROI. Sometimes he makes a profit in a tournament, sometimes he loses, but in the long run he wins on average, he makes a profit of 24.9% of his average buy-in cost. It should be noted that such a ROI is very strong considering that 80% of online poker players lose in the long run. A more classic ROI for a winning player will be around 2% and 10%

The total profit is understandable I think, no need to add to it.

Next, skill. The player in question has 79. The score ranges from 1 to 100, 100 being perfection. Here, it is difficult to comment since the skill is given by Sharkscope according to its own algorithm. Sharkscope analyses all the player's statistics, compares them to the other players and assigns a score between 1 and 100

Further on, we find the "Status" box which tells us if the player is in a winning or losing tournament pass.

Next you have the player's total chart with all of his tournament wins.

You can leave your mouse cursor over the dollars and see the precise winnings at a given time: 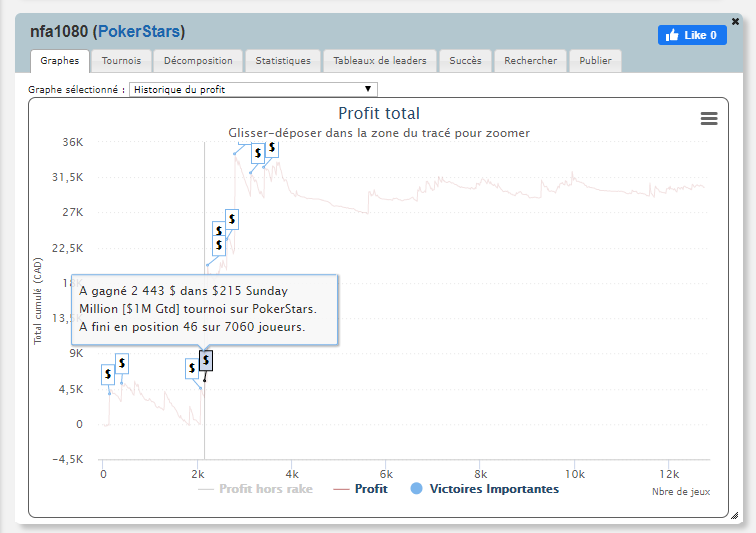 This is for the "Graphs" tab. 7 other tabs are available. Note that the free version of SharkScope will not give you access to all tabs

Here you can find the last 8 tournaments played by the player. Since we searched the PokerStars room, only tournaments played on PokerStars will appear. When you search for a player name on the platform, if the player has the same player name on multiple platforms, it will be a different profile for each room. If "nfa1080" also has a profile on Winamax, you will have to do 2 separate searches

You then have the date when the tournaments were played, the type of games played (Hold'em, Omaha, etc), the buy-in, the position at which the player finished, the number of entries and finally whether or not he made a profit in the tournament. You will be able to search for tournaments by date, but only with SharkScope's paid account (for example, to detail a player's winnings and losses by year or poker variant)

The "Decomposition" tab will give you additional information, some of which requires a subscriber account

Here you can see, for example, which player "nfa1080" loses the most money against or which variant he prefers.

The tab "Statistics" will give us a general portrait of the player. A kind of summary

The number of stars indicate his ranking in relation to all the players listed on SharkScope.

The "Leader Tables" tab tells us our opponent's strengths (in which variant does he rank higher than anyone else?): 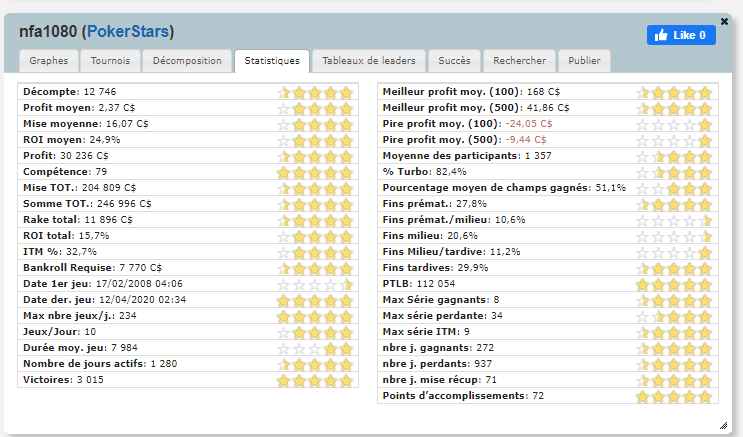 Leader Tables" tab tells us our opponent's strengths (in which variant does he rank higher than anyone else?):" />

The "Hits" tab tells us what challenges the player has accomplished. Each card represents a challenge to be completed. When the player has completed the challenge, the card flips over. Here is an example:

Finally, the "Publish" tab allows you to share certain hands on your social networks by enabling notifications 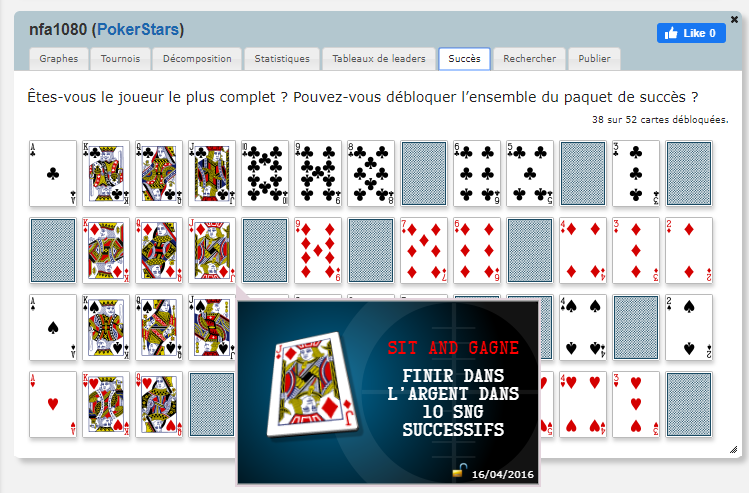 For example, we may want to compare his 2018 and 2019 results. Or find out how he does in tournaments with more than 100 players, etc.

The Limits of SharkScope

When searching for a player, you may come across the phrase "This player has not agreed to have his results displayed". It should also be mentioned that, although SharkScope makes every effort to obtain as much information about players as possible, some tournaments are not counted (it is always difficult to know the exact reason for a tournament not being counted, but it is a fact)

How to take advantage of the information found on SharkScope

The vast majority of poker players play to (ideally) make money. In order to do so, you have to learn the game, refine your strategies and become the best player you can be, of course. But you also have to choose your competition. Even if you are a very good poker player, if you are always playing against a stronger competition than you are, the chances of you being a losing player are very high. So you want to play against players who are not as strong as you are and SharkScope is a perfect indicator to help you

When you play often, you'll want to take notes on the players you encounter. You can take notes at each of your tournaments, but you can also save time by noting down the information SharkScope will give you about a particular player. For example, if you're a heads-up tournament player (head-to-head, two-player tournament) and you run into a new player, instead of wasting most of your time against him before you realise he's better than you, you can do a SharkScope search. If you see that he has won $100,000 in heads-up wins in the last year in $100 tournaments, maybe it's better to make him your opponent as little as possible

When you do a SharkScope search on a player, remember to write down as much information about that player as possible. On all online poker rooms you have a place to take notes about a player. Feel free to jot down any information you find about the player. No need to be a long novel, just a summary of the kind:

Here are the different possible SharkScope subscriptions with their respective prices and benefits.

When reading the features of some subscriptions, you will read that some include the SharkScope HUD which we haven't mentioned yet. 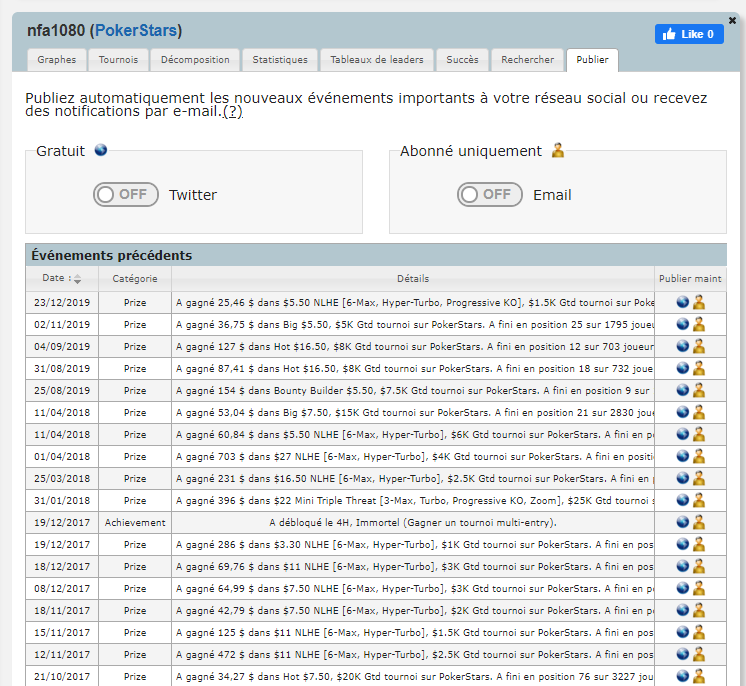 The SharkScope HUD is PC or MAC software that you download to your computer. It acts like a conventional HUD (PokerTracker 4, Xeester), but is tournament oriented. The advantage of this HUD is that it displays site statistics directly on your table

You see the following statistics displayed on the table:

When you click on a player's HUD, you will get more information about that player: 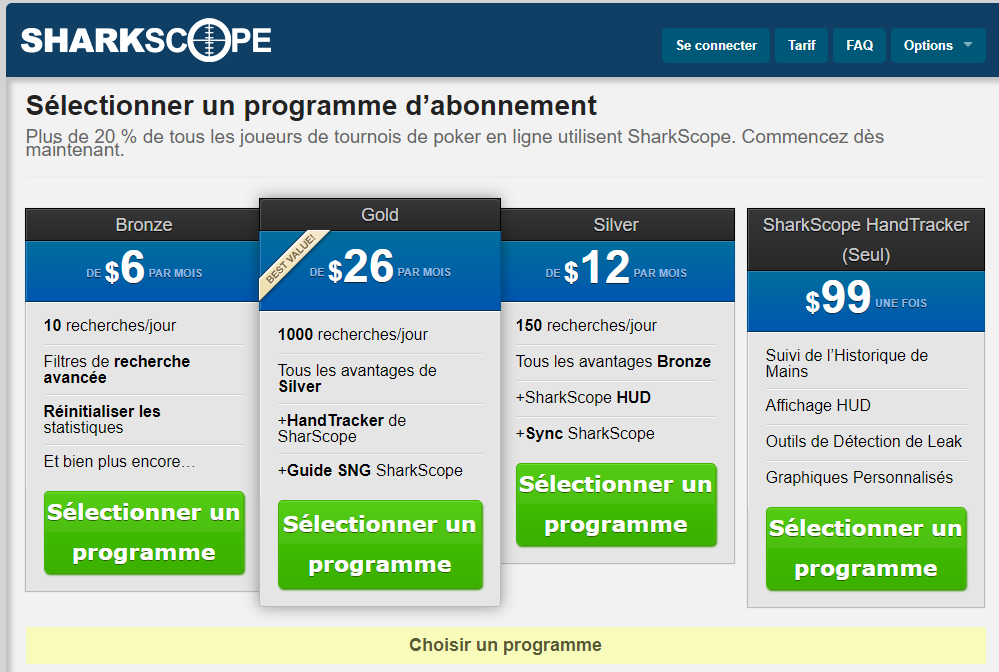 To enjoy the benefits of the SharkScope HUD, you will need to have a Silver subscription at a minimum of $12 per month